2. Triaxial Dynamic & Static Testing Systems:
The Triaxial Testing system is intended to be used for performing conventional triaxial tests, namely a constant rate of strain and compression test, as well as advanced procedure such as stress or strain path. This system also provides the Necessary versatility of easily perform dynamic tests for liquefaction, resilient modulus and cyclic strength are the few of the tests. The triaxial testing system includes all the necessary software modules to perform the above tests.

3. Large Box-Shearing Apparatus:
A Traditional test of the shear strength of soft clay and of dry sands and gravels is the shear-box test. A sample of soil is placed in a rectangular box whose top half can slide over the bottom half and whose lid can move vertically. A normal load is applied to the lid and a shear force is applied to the top half of the box. 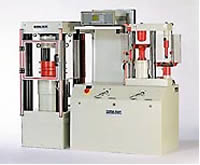 6. Laboratory Vane Tester:
Conducting vane tests to determine the shear strength in soft sorls without samples disturbance is easily achived with the laboratory vane tester. A hand operated frame has a base plate capable of accepting standard specimen molds and sample tubes . Stress is applied through the vane by means of any one of four calibrated springs. Easy- to- read scales indicate load application and any vane deflection.

7. Resonant Column & Torsional Shear Testing System:
The system combines the features of both resonant column and torsional shear devices into one system so that the effects of soil parameters such as void ratio, confining pressure , strain , amplitude and number of load cycles on shear modulus and material damping can be evaluated. In fact by utilizing all available options this system is capable of full spectrum of modulus measurement , ranging from ultra low strains to high strains with significant over lap.

8. Consolidation Test:
Consolidation is the process of gradual transfer of an applied load from the pore water to the soil structure as pore water is squeezed out of the voids. A consolidation test system includes a consolidation which consists of rigid base , a consolidation ring, porous stones, rigid loading plate and a support for a dial indicator. This system is used for determination of the rate and magnitude of consolidation of soil when it is restrained laterally , loaded and drain axially.

10. Compression Testing System:
The system is used for compression tests on building materials such as concrete, steel-reinforced concrete, brick works or compression and bulking tests on columns , piles. Now a days single acting and double acting hydraulic actuators are being in use the latter especially when it is also necessary to carry out tensile tests.

11. Fatigue Testing System:
High cycle fatigue testing to long lives requires high frequency equipment. Since the vibration frequencies are high and the stress amplitude is low, real data is scarce. In response these need, new types of machines are being developed. Several electro dynamic and servo hydraulic shakers can be used to generate frequencies up to 1 KHZ.

12. Concrete Testing Systems:
This testing system provides a professional and efficient testing of large series , either cubes 15 and 20 cm or cylinders 15 X 30 or 10 X 15 cm the system consists of a closed loop, servo controlled hydraulic actuator.

13. Multi Axis Vibration Table:
A shaking table consists of a platform and hydraulic actuators that drive the table generally in six degree of freedom . This simulator of earthquake or other dynamic loads has a wide range of application in testing of Models of Civil Engineering structures , mechanical and electrical equipments. Its high technical characteristics enable testing of building models, models of bridges, power supply and industrial building, nuclear power plants and any kind of mechanical or electrical equipments.

14. ON Line XRF on Production line

For quality control and Analyzing online at end of production line in Cement Industries, Mining , Mineral Processing and Power Plants. 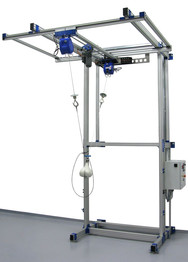 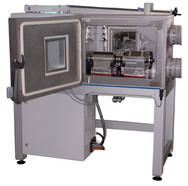 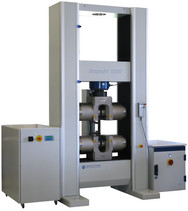